During the pandemic of 2020, we all got some weird hobbies. Some of us learned how to bake bread. Others discovered a foreign language.

I took strange hobbies to another level by starting a “church.”

Starting a church sounds crazy, but it’s been an incredibly impactful experience that I want to share.

Churcha Chironja is a practice where you, your friends, and your community come together in a secular setting to ask and ponder questions that are usually the province of religion. You step back from your day-to-day problems and think longer-term and bigger picture. At its best, the church is a magic seed that grows into deep connections with strangers and friends alike.

Every Sunday, we gather over a meal followed by a “sermon,” a short talk about a life topic that has challenged the speaker. Personal stories are encouraged. Then we have a conversation where folks react to the sermon and share their own stories on the same theme. We end with a poem that we co-create. 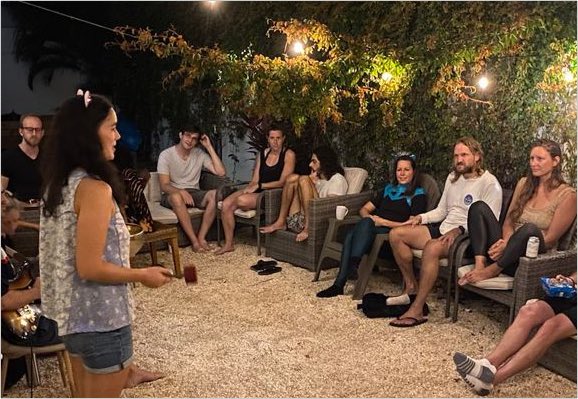 The meal: The meals have ranged from quick leftover stir-fries to elaborate pasta-making endeavors. We were lucky to have a large kitchen. The joy of banding together to roll out six pounds of pasta with water bottles was matched only by the daunting task of cleaning all that flour from the crevices of the kitchen. The logistics of large group meal preparation was a challenge and delight. 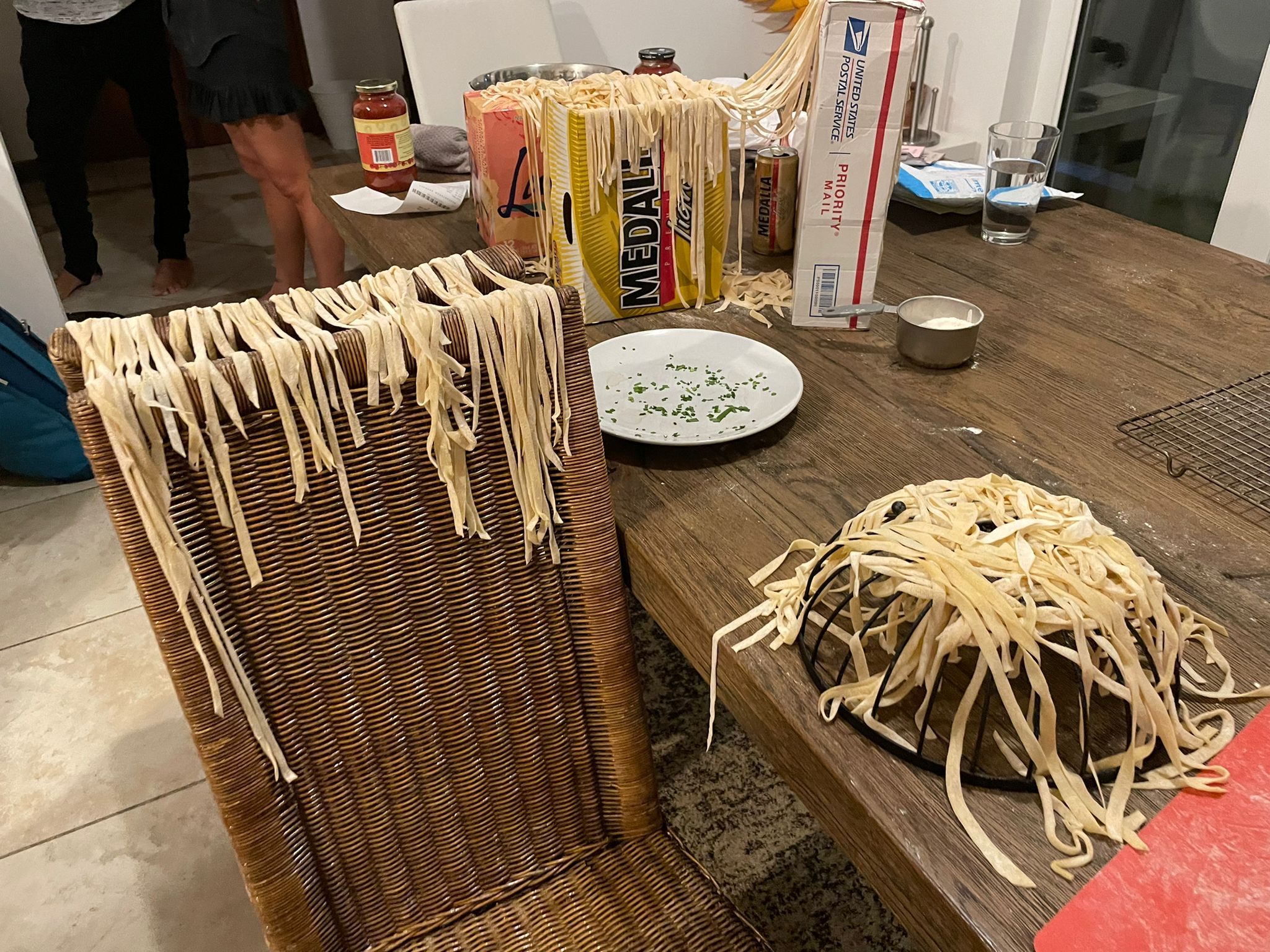 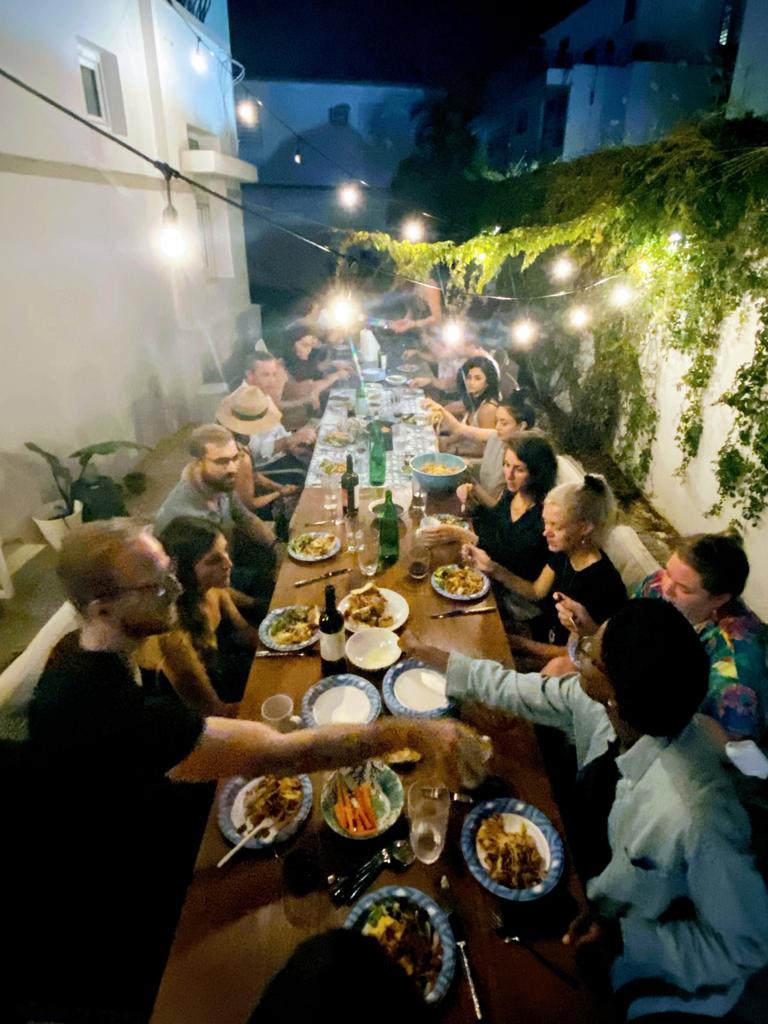 Much pasta was made and eaten. We had to get creative finding the right surface to dry it on.

The sermon: Every week, someone new would give the sermon. The best ones brought in a question centered around stories from the speaker’s life. Usually, the sermon is a talk, but in a memorable “sermon,” the speaker played songs (post-vaccination). Afterward, some of us ended up sitting on the porch singing along to karaoke favorites. Another night, a usually light-hearted friend talked about losing his father to Alzheimer’s. His sermon sparked a conversation about the unreliability of memory. One person had multiple sources disagreeing on whether or not she had a pet donkey as a child!

The conversation: After the sermon, folks would share their reactions and experiences. Sometimes it took a while for the first person to speak as everyone digested what they had just heard. The best comments were personal, specific, and humble. Less good ones were treatises on philosophy or stories where the speaker was the hero. As we refined the practice, we started sharing guidelines to move the conversation in the direction we wanted. And it worked. (See below for a guide to church).

The ending poem: Because every good event needs a good ending, we end church with a poem. The speaker starts with the first word, and then the poem travels around the circle, with each person adding one word or punctuation mark. We read the entire poem out loud and send it out to the group as a souvenir. 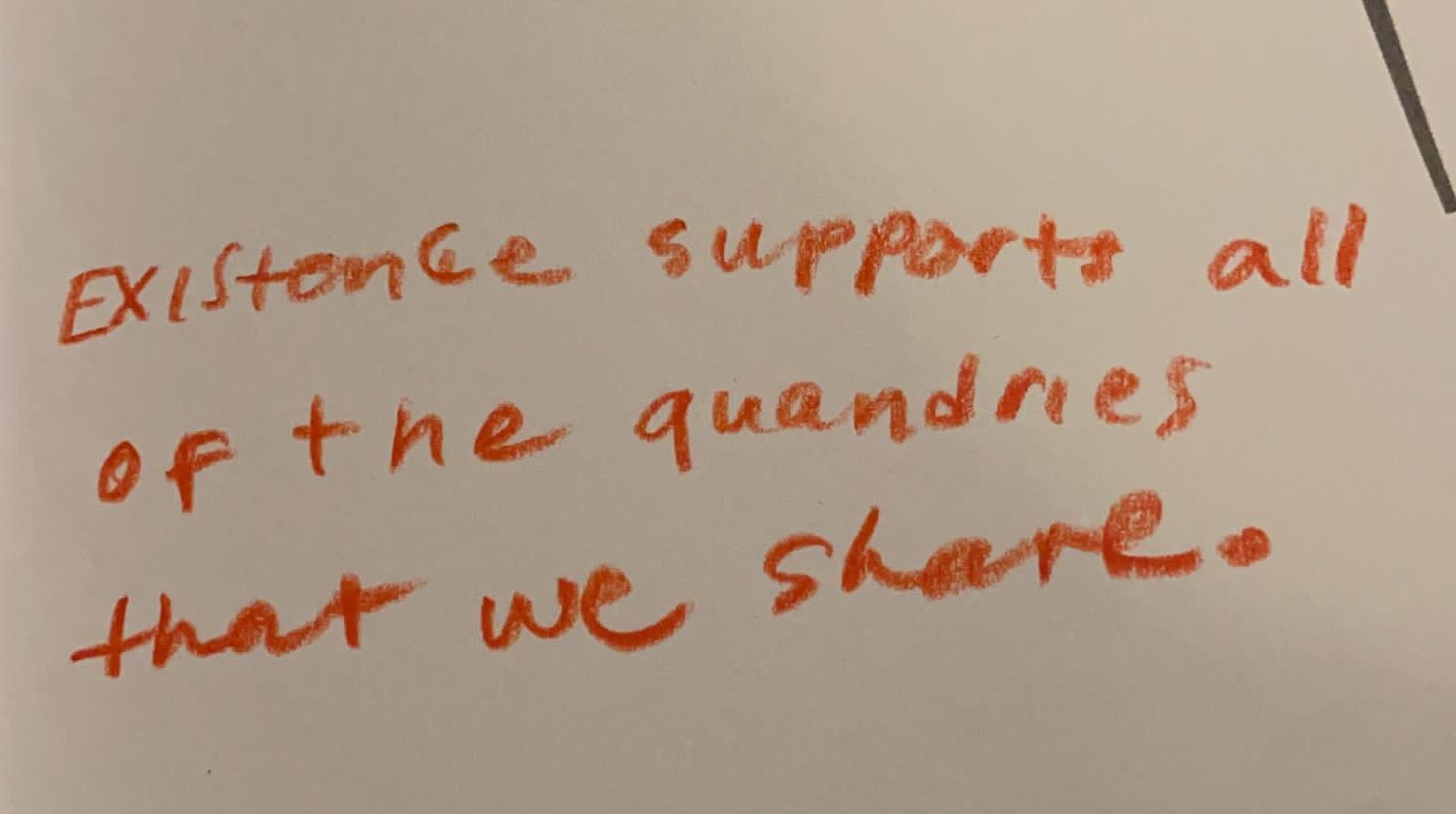 Existence supports all of the quandries that we share.

In November, after dealing with lockdown alone in NYC, I decided to move to a community house in Puerto Rico. We had seven bedrooms and tons of amazing people. I was meeting new friends all the time, but I wasn’t learning about their essence or making as deep of connections as I wanted.

One Sunday, as Wren and I waited in line for Costco to open, I broached the idea of doing a community version of church minus the God aspect. We began brainstorming enthusiastically. Our community was already close. It was just a matter of inviting them over for Sunday dinner and sneaking in a sermon. Wren led the first one, kicking off the invite with this note:

At Casa Chironja House dinner tonight, inspired by Samantha, I’ll be delivering a short agnostic Sunday Sermon on Anna Karenina. We’re experimenting with the format with the hope of continuing at waterfalls on future Sundays :). No prior knowledge of Tolstoy required!

She spoke about her journey from religion to philosophy. We followed up with a conversation about our own religious experiences and how they had led us to that day. It was one of the best conversations I’d had since arriving nearly a month before.

We continued church each week and had some wonderful conversations with smaller groups of 4-5 people. It was easy to be vulnerable, and our friendships deepened.

As we continued the tradition, challenges began to arise. Each week a new person would present the sermon, and some topics worked better than others. People began including PowerPoints. And while their talks were interesting, they felt more informational than spiritual.

And the group began to grow. We began to have 10, 15, or even 25 people. One week a former governor of Puerto Rico gave the sermon. The challenges began to mount. With so many people, you didn’t feel as secure and close to everyone. The temptation to show off your smarts would arise while being vulnerable felt farther away. And it was challenging to get that many people to sit still and listen!

To get people to focus on the sermon, we separated it from the meal, both in space and time. Before starting, we would finish dinner and rearrange the seating area so that folks could put their energy and attention towards the sermon.

To improve the sermons, we wrote guidelines for the speakers. Powerpoints were banned. Sermons questioning rather than teaching were better (and had the advantage of being easier to do). Having a text was not necessary. Starting with a personal struggle rather than a book led to more authentic and honest sermons.

We gave more structure to the conversation. We’d begin with a short history of churcha chironja so that folks could understand why they were there. And we added conversational guidelines to keep it from veering into a philosophy club or humblebrag session.

At their best, the sermons taught us things about ourselves and each other. Sometimes in small and unexpected ways.

One Sunday, I bonded with a newcomer over our hate for food waste and willingness to eat questionable leftovers rather than throw them out. In another, I had a realization that rearranging furniture, even just a little, is the first step to my feeling at home in a place. A friend felt incredibly uncomfortable during the musical sermon but was inspired to write her own songs by the end of it. I loved how we got something different and surprising from church each week.

What the future holds

This July, I left my community in Puerto Rico. As the world opened up, I had to attend to some travel and family commitments that I could no longer ignore. But the church lives on. It turns out I was not the most critical ingredient to its success. Others have taken over the Puerto Rico branch, and the sermons are going strong.

Even better, Church is something that can live in many places. A friend began their own tradition at the Radish in Oakland. And I’ve joined or hosted Sunday sermons in New York, Boston, and Palo Alto. I plan to continue the tradition with whatever community I find in my travels. While I miss my Puerto Rican home, I am excited to bring in new friends to the practice and see my friends who have left the island do the same.

Hosting: We’ve successfully run Churcha Chironja with up to 25 people, but if it’s your first time hosting, six or fewer will be much easier to manage. In Puerto Rico, we would invite people over to help cook at 6, plan to eat at 7, and start the sermon at 8. We’d usually wrap up by 9:30. If you’re not much of a cook ordering food or doing a potluck is a very reasonable option! Everyone sitting at a table to eat isn’t super important, but make sure you have a comfy, non-dinner-table spot to do the actual sermon. Note: I’ve always done church as a dinner event, but a daytime event would probably work just as well.

Choosing the speaker: The host does not have to give the sermon. When choosing a speaker, optimize for someone comfortable being vulnerable and going deep in conversation. In our experience, this was more important than public speaking skills.

Here’s a guide you can send the speaker:

Thank you for giving the sermon! A Chironja church sermon is a short talk about a life topic that is meaningful to you. You can bring in a text, but the most important part is to bring in a personal story about why this matters to YOU. A good topic will inspire others to be vulnerable and share their stories too.

The sermon can be as short as 5 minutes and as long as 15. But if you feel confident that you have something great to say, break the rules and talk longer! After the sermon, we’ll have a conversation. Keep in mind that the conversation, not the sermon, is often the essential part of the evening. Hopefully not needing to be the star of the show takes off the pressure.

Starting church: After the meal, make sure everyone moves to a new location. If needed, you can just move the chairs to a new spot. Ideally, there should not be a table in the middle, and you should be out of the meal context. If you’ve brought dessert, now is the time to serve it. People can eat on their laps during the sermon.

Welcome to church. For those of you who are new, this is not a typical church, we aren’t going to worship any gods, and we’re not going to give you all the answers. Instead, we’ll take some time to ponder life’s mysteries and talk through our challenges together. We’ll start with a short sermon, followed by a conversation. Then we’ll conclude the evening with the closing ceremony. Here are some guidelines for the conversation:

Concrete stories are better than abstract facts or theories. The goal is not to share platitudes but rather to bring your whole life and experience to the table so that others can learn from it. Tell the story and let people come to the philosophy themselves.

Keep your stories personal. Your friend’s struggle is less interesting than your own. If everyone follows this rule, you’ll leave knowing something new about the people here and even more about yourself.

Be humble. This conversation isn’t about things you think you’ve figured out. Remember, the more awesome you sound, the harder it is for others to share their own challenging moments.

Concluding: Once everyone has had a chance to talk, or if it’s getting late, start to wrap up the conversation. Ask if anyone who hasn’t spoken wants to say anything. Once that’s done, move on to the closing ritual, the poem. Find a scribe who will write down the poem as it is created.

Here’s a sample script for introducing the poem:

We are going to close with a poem in which each person says one word or punctuation mark. The speaker will start and they choose whether to go clockwise or counterclockwise. When we get to the last person, we’ll read the poem and send it to the group. Some people find this part stressful. If you don’t know what to say, use a short, concrete word. Remember, the poem can’t be bad. Weird, definitely, but never bad.

When the poem is complete, the scribe will read it aloud. Sometimes we’ll play a gong sound to conclude. Then everyone can disperse, help clean up or continue the conversation more informally. Congratulations, you’ve just run your first Chironja church!